On May 20, 2015, the Deepwater Horizon trustees released a draft plan for a fourth phase of early restoration, which proposed 10 projects costing around $134 million. With this recent announcement, now is a good time to review where the money has been spent so far and how the fourth round fits into the broader early restoration picture. First, we need to review some background.

As a refresher, a Natural Resource Damage Assessment (NRDA) is a process focused on restoring natural resources injured by an oil spill. In a typical NRDA, the trustees assess injuries to natural resources and then come up with a restoration plan to address those injuries. Restoration projects begin once the assessment is complete. Here, however, BP agreed to provide up to $1 billion so that certain restoration projects could be started before the assessment is finished.

Phases I through III 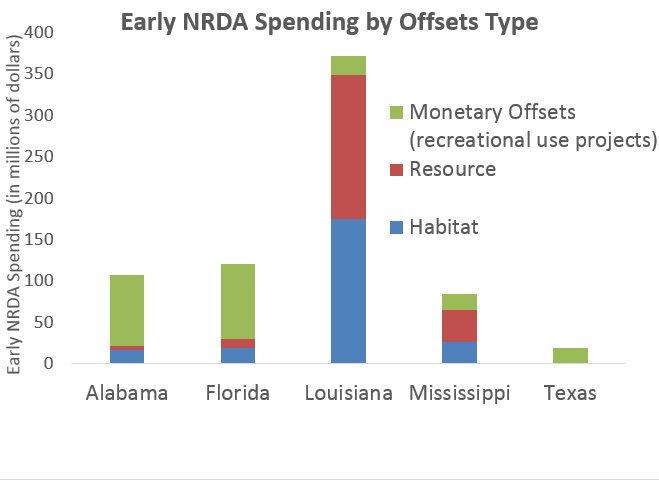 The graph shows an interesting picture of how early restoration funds have been spent for the first three phases. In Louisiana, the majority of funds have gone to projects receiving habitat and resource offsets (note that the majority of Louisiana’s total is from one project – the Outer Coast project – which cost approximately $318 million and received both types of offsets). Mississippi’s spending is fairly balanced between offset types, while the other three states (Alabama, Florida, and Texas) have used the majority of funds in Phases I through III for projects receiving monetary offsets (i.e. recreational use projects). Across the Gulf, 33.7% of funds went to projects receiving monetary offsets (i.e. recreational use projects). In Alabama, Florida, and Texas, however, over 75% of funds went to such projects.

For the proposed fourth phase, less than 10% of project funding is allocated to projects receiving monetary offsets (i.e. recreational use projects). Instead, more than two-thirds of project funding is slated to go to projects receiving resource offsets. This includes the Sea Turtle Early Restoration project and the Pelagic Longline Bycatch Reduction Project–the first early restoration projects that are to be implemented Gulf-wide.

It is important to note that the fourth phase of early restoration projects has not been finalized yet, which means that changes can still be made. The public has until June 19, 2015 to comment (click here for our guide to public participation), and a number of public meetings will be held across the Gulf from June 2 through 11. Click here for additional details about when and where those meetings will take place.

The public has an essential role to play in the future of the Gulf, through the NRDA early restoration process and beyond. By understanding how money is being spent now, it may be possible to positively influence how the billions of dollars that are expected to be available for Gulf restoration will be spent in the future.

We used information compiled in our Restoration Projects Database, allocating the costs of a project to the type of offset it received (we used three broad offset types: habitat, resource, and monetary offsets).

Where projects received more than one type of offset, the total cost was split evenly between the offset types. For example, the Pensacola Bay Living Shoreline project cost $10,828,063, receiving 86.63 DSAYs of salt marsh habitat offsets and 28,813 DKg-Ys of benthic secondary productivity offsets. Thus, the habitat and resource offset categories were each credited $5,414,032.

Similarly, when a project took place in two or more states, the project costs were divided in the same proportion as the offsets. For example, the total project costs for the “Comprehensive Program for Enhanced Management of Avian Breeding Habitat Injured by Response in the Florida Panhandle, Alabama, and Mississippi” was $4,658,118, with BP receiving offsets of 1678 DSAYs of nesting habitat for beach nesting birds. These offsets were split among three states in the following proportions: Florida (80.6%), Alabama (3.2%), and Mississippi (16.2%). We therefore allocated the project costs of $4,658,118 among the three states in the same proportion as the offsets, with Florida credited $3,753,144, Alabama $149,904, and Mississippi $755,070.

Finally, for the two projects in the proposed fourth phase that will be implemented throughout the Gulf of Mexico, the funds were allocated to a “Gulf-wide” category.