Halting the Lionfish Invasion through Smart Law and Policy

By Read Porter, Senior Attorney and Director of the Invasive Species Program

It is an invasive species that is one of the most pressing threats to ocean ecosystems in the Caribbean and Gulf of Mexico. And my wife was wearing one on her ear. 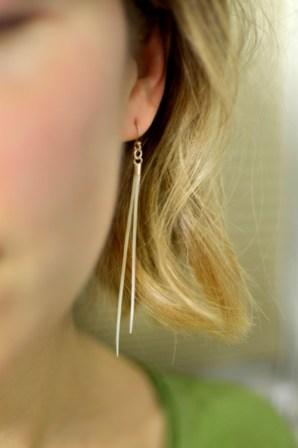 My wife had just bought these beautiful earrings, made from the spines of the venomous red lionfish (Pterois volitans), from a studio in Rincon, Puerto Rico. Later that trip, we shared delicious empanadas con pez leon. The jewelry and the food share a common thread—using markets as a tool to control the raging lionfish invasion that is wreaking havoc on Caribbean and Gulf coral reef ecosystems.

Red lionfish are native to the Pacific and Indian Oceans, where they share the reefs with and are kept in check by other species that co-evolved with them over millions of years. But the story in the Atlantic is very different. DNA evidence indicates that the Atlantic lionfish invasion began with a small number of female lionfish that escaped or were intentionally released from captivity and first observed in the Atlantic in 1985. Lionfish are voracious carnivores capable of consuming half their weight in a single feeding, and they are highly fecund, producing 30,000 eggs every four days in warmer climates. As a result, the initial escape of a handful of individuals proved the vanguard of a much bigger problem.

USGS animation of lionfish sightings from 1985 to 2013

Today, red lionfish and their cousins, common lionfish (Pterois miles) are widespread across the Caribbean and Gulf of Mexico—in some places they reach concentrations of up to 1000 lionfish per acre. These lionfish are causing substantial economic and environmental harm, as well as harm to human health. They get into lobster traps, where they reduce catch and can sting fishermen; they compete with other economically-important fish (such as snapper); and they deplete herbivorous fish that keep algae in check, undermining reefs’ ability to respond to stressors like climate change and ocean acidification as well as affecting tourism.

While we can’t get rid of lionfish entirely, scientists, lawyers, fishermen, community members, and others are all working to limit its harm—and my wife’s earrings are part of the story.

1. Prevent the introduction of other lionfish and scorpionfish!

So far, 2 species of lionfish are established in the Atlantic, but at least another 10 species are commonly in trade in the United States (see pp. 11-12) and could be introduced at some point in the future—and there are hundreds of other scorpionfish species, every one of which is venomous and few of which are native to the Atlantic. For example, stonefish (Synanceia spp.) are the world’s most venomous fish, and their stings cause intense pain—a fact that many Indo-Pacific swimmers and even researchers have learned to their lasting regret—but they can be and are purchased in the aquarium trade.

Despite their potential to harm the economy, environment, and human health, neither the species that are already here nor any other related species are on the list of “injurious wildlife” maintained by the Fish and Wildlife Service. As a result, importation and trade in these species continues unabated, and it’s only a matter of time until the next species is introduced to our waters. New injurious wildlife listings take years, so it’s important to get the process started now, before it’s too late. Congress can help, too—just two weeks ago, the Senate Subcommittee on Water and Wildlife held a hearing on a bill that would reform the injurious wildlife listing process—a long overdue step. And the House Natural Resources Committee may take up the lionfish issue soon.

States are getting in on the prevention action. Florida previously outlawed importation of red and common lionfish, but just last week expanded its protections to cover all Pterois species—a step forward, even though there’s a long way to go before the full range of potentially invasive scorpionfish are adequately regulated. If other states follow suit, the risk of future invasions can be substantially reduced—even if the federal government doesn’t take action.

To learn more about injurious wildlife, watch our recent webinar:

Prevention is the most important and cost-effective strategy for managing invasions, but we can also take concrete steps to manage the fish that are already here. In the United States, the Aquatic Nuisance Species Task Force will soon act to adopt a national lionfish management plan—a critical step that will help us identify priority areas and habitats in need of special protection, what strategies we use to knock back the population, and how we may need to adapt our laws to manage the problem. Control efforts will require all stakeholders to work together.

Derbies represent one key strategy for engaging the fishing community in lionfish control. Last month, local fishermen in Barbuda competed for $2,500 in prizes for the largest lionfish catch—and along the way, they learned how to safely handle lionfish. Check out our work with the Barbuda Blue Halo Initiative.

Market measures are also promising—lionfish are tasty and can be used to make beautiful goods.  In Texas, lionfish meat can sell for up to $18 per pound. Governments can participate in these new markets by providing financial and technical support for fishermen, distributors, and consumers, by purchasing lionfish directly, and—most importantly—by ensuring that regulations do not unnecessarily restrict harvest of invasive species. Florida has taken the lead here as well—in the rule issued last week, the state authorized spearfishing for lionfish in certain instances and began the process of ensuring that open season on lionfish continues year-round.

Lionfish are an integral part of ecosystems in the Indo-Pacific. But they are a destructive force outside of their native habitat. The threat facing Atlantic, Caribbean, Gulf of Mexico, and even South American reefs is severe, but there is still hope. If we can move enough lionfish off our reefs and onto our plates and ears, we can limit the destruction—and if we can learn a lesson from lionfish, we can protect the ocean by stopping the next invader before it arrives.